Lebogang: A Pillar of Hope 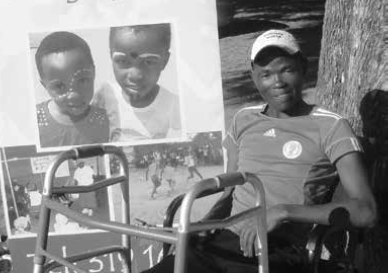 When a HOPE worldwide Botswana staff member found Lebogang*, he and his siblings were living in terrible conditions, neglected by their mother who spent her time drinking traditional brew. Without a home, the family lived as squatters underneath a plastic tarp with no access to toilets or clean water. Due to his family’s poor finances, Lebogang was forced to work as a young cattle herder to support his family.

When he complained about the difficulties of cattle herding, he was beaten unconscious by a group of boys. He suffered permanent damage to both his legs, leaving him unable to walk unassisted, as well as constant headaches from the blows to his head as a result of the beatings. Shortly after this incident, his mother passed away and his older siblings left to pursue their own lives, leaving Lebogang to care for his younger sister and brother, with no family and financial support. His siblings were eventually forced to drop out of school because they couldn’t afford their school fees and uniform. Lebogang gave up hope — HOPE worldwide staff members found him dirty and his health deteriorating.

The HOPE worldwide team was able to provide the psychosocial and financial support that he and his siblings needed. HOPE worldwide focused on providing for Lebogang’s younger siblings needs. Firstly, they were helped to apply for a birth certificate and a national identity card, which gave them much needed access to health care and youth employment programmes. Next, his younger sister was placed back in school with a new school uniform. The Village Development Committee also gave them temporary housing. Through partnerships with the Botswana National Youth Council and a private company called, “We Love Them”, Lebogang will soon have a piece of land and a house of his own.

With the support of The Coca-Cola Africa Foundation, HOPE worldwide in Botswana was able to give Lebogang hope for a better future. He now has a job and is excited to see his new house and support his siblings through school. “If it was not for HOPE worldwide, I really don’t know where I and my siblings would be,” says Lebogang. *pseudonym