The Coca Cola Africa Foundation has provided $2,400,000 over 6 years to Hope Worldwide to assist 172,000 orphans and vulnerable children over 6 years in Kenya, Ivory Coast, Botswana, Zambia, Zimbabwe, South Africa, and Mozambique beginning in 2008. 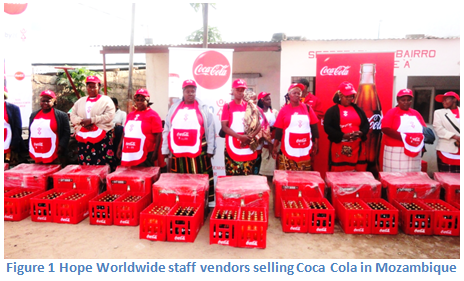 Over the past 3 years, with the generous support from The Coca-Cola Africa Foundation (TCCAF) and other strategic and leveraged donors, HOPE worldwide (HOPEww) has improved the well-being of over 46,700 Orphans and Vulnerable Children (OVC) living in high HIV prevalence and impoverished African communities in these 7 countries.

Many of these children have faced enormous challenges, often lacking access to even the most basic of needs and services such as shelter, food, healthcare and schooling. Many young children are also deprived of adequate nurturing, nutrition and early stimulation which is so critical for their long-term well-being and productivity as adults.

To achieve this, HOPEww has used tested OVC Care and Support Models using a combination of service delivery and capacity building strategies, as well as leveraging opportunities to maximize its performance, scale, impact and sustainability. It also integrated the latest research in OVC programming into its model which stressed the need to promote and strengthen Women’s Economic Empowerment (WEE), Early Childhood Development (ECD) programs and Youth Development.

Over the past 3 years, HOPEww has achieved its target of reaching an additional 30,000 children, and made significant progress in terms of its Performance, Impact, Scalability, and Sustainability.

Performance: Over the course of the grant, just over 30,000 OVC benefitted from a range of direct services, including educational, nutritional and psychosocial support. In the past year alone, almost 7, 500 children were added to the program.

An additional 16,826 children benefitted indirectly through interventions such as service provider and caregiver training, and strengthening of Community Childcare Forums.
The total number of children that benefitted reached 46,921.

In keeping with global ‘Best Practice’ OVC approaches HOPEww has focused primarily on supporting households and building their capacity. The total number of households reached during the course of the grant was 6,375. In the past year alone, just over 2,000 households were added to the program, promoting a more effective way to help families cope with the increased burden of care. Almost 3,000 caregivers and service providers were trained to improve service delivery and support to children.

Both qualitative and quantitative data from the field has shown that the combination of interventions has improved the well-being and has reduced vulnerability of children in most countries. The main areas of improvement have been seen in; Food Security, Shelter, Psychosocial support and Education. Quantitative tools used include the ‘Child Status Index’ (CSI) which tracks vulnerability across 6 domains, and the Body Mass Index (BMI). CSI vulnerability scores are measured bi-annually. However, in certain countries that have experienced deteriorating socio-economic environments such as Zimbabwe and Mozambique, CSIs scores showed little recent improvement.

The increase in Women and Parent Support Groups have also built capacity and reduced vulnerability by promoting learning, sharing and access to services.

Several key strategies have enhanced HOPEww’s ability to scale up its support to more children, improve program impact and sustain its efforts. This has been primarily achieved through;

As women carry the much of the OVC care burden, HOPEww has placed emphasis on increasing economic empowerment opportunities, especially for female caregivers. This has been achieved by promoting and creating, Income-Generating Activities (IGAs), Savings & Loan schemes, and by facilitating access to Business Skills training and social welfare grants. IGAs have included the Coca-Cola Vendor initiative for OVC. A summary of HOPEww’s WEE activities supported by TCCAF over the past three years is tabulated below.

In most countries, HOPEww has built strong, strategic partnerships with both national and local government structures. In several countries, HOPEww sits national OVC Steering Committees where it continues to influence national policy and strategy development. Local partnerships have led to increased access to services. An example of this is HOPEww’s partnership with the South African Social Security Agency (SASSA) through which nearly $7,000 in grants are distributed to needy families on a monthly basis. Governments have recognized the valuable contribution of TCCAF/Coca-Cola has made towards the care and support of OVC. In Mozambique, the Coca-Cola Vendor program has been approved as a 5by20 initiaitve.

HOPEww has been successful in leveraging significant new funding to address the growing number and needs of OVC. Over the course of the grant HOPEww was able to secure several new grants thanks to TCCAF-supported work. This has included a combination of corporate and bi-lateral donor funding. Corporate partners leveraged amongst others include; Massmart (Walmart), KFC, and Allied Mobile. Bilateral donors that have invested in ongoing work include CDC, USAID and AusAID.

Partnership with Coca-Cola BU and Bottlers

In 3 of the 7 countries, HOPEww was successful in establishing partnerships with Coca-Cola offices and/or bottlers. This has translated into financial, product and small business support.